Our Cause Who We Are

The primary mission of LUCER is to enhance the quality of life for diverse, limited-resource audiences through supportive research at local, state, regional, national and international levels.

Our Extension and Research programs address the needs of small farmers in 12 counties throughout the state of Missouri. We have regional and area educators in both Urban Impact Centers in Kansas City and St. Louis as well as outreach centers in Sikeston, Lilbourn, and Caruthersville in Southeast Missouri. Our Extension Specialists and researchers, located primarily on Lincoln's main campus, facilitate teaching,  Extension and outreach programs covering relevant, essential subject areas that positively impact Missouri residents.

At the close of the Civil War, soldiers and officers of the 62nd United States Colored Infantry, stationed at Fort McIntosh, Texas, but composed primarily of Missourians, took steps to establish an educational institution in Jefferson City, Missouri, which they named Lincoln Institute. The following stipulations were set for the school:

1.  The institution shall be designed for the special benefit of the freed African-Americans;
2.  It shall be located in the state of Missouri;
3.  Its fundamental idea shall be to combine study and labor.

Members of the 62nd Colored Infantry contributed $5,000; this was supplemented by approximately $1,400, given by the 65th Colored Infantry. On January 14, 1866, Lincoln Institute was formally established under an organization committee. By June of the same year, it incorporated and the committee became a Board of Trustees. Richard Baxter Foster, a former first lieutenant in the 62nd Infantry, was named first principal of Lincoln Institute. On September 17, 1866, the school opened its doors to the first class in an old frame building in Jefferson City.

Lincoln University of Missouri is a historically black, 1890 land-grant, public, comprehensive institution that provides excellent educational opportunities including theoretical and applied learning experiences to a diverse population within a nurturing, student-centered environment. 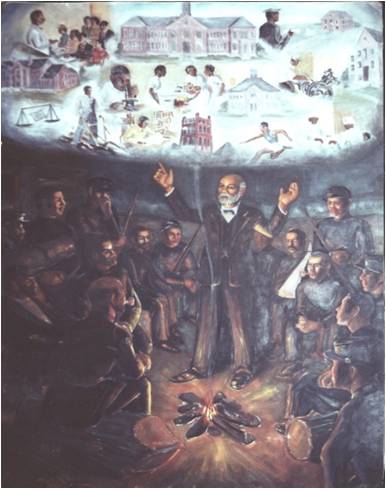