Drug and Alcohol Processes and Procedures

On December 12, 1989, President Bush signed the Drug-Free Schools and Communities Act Amendments of 1989 (Amendments) Public Law 101-226 Section 22 amends provisions for the Drug-Free Schools and Communities Act of 1986 and the Higher Education Act of 1965 to require that, as a condition of receiving funds or any other form of financial assistance under any federal program after Oct. 1, 1990, a university or college must submit certification that it has adopted and implemented a drug prevention program to prevent the unlawful possession, use, or distribution of illicit drugs and alcohol by students and employees (See 20 USC 1011i & 34 CFR 86 for more info).

Lincoln University has developed and adopted the drug and alcohol awareness/prevention program described herein pursuant to the requirements set forth in the Drug-Free Schools and Communities Act.  As set forth in 34 CFR 86.100, Lincoln University is required to provide at a minimum, an annual distribution of the Drug and Alcohol Policy in writing to each employee and student that must contain the following:

Learn about the alcohol content of wine, beer, and liquor to help you and your friends drink responsibly. Please familiarize yourself with the alcohol percentages of your favorite drinks, both for your safety and your highway companions.

In the United States, a "standard" drink is any drink that contains about 0.6 fluid ounces or 14 grams of "pure" alcohol. Although the drinks below are different sizes, each contains approximately the same amount of alcohol and counts as a single standard drink  (standard sizes are listed in fl oz).   click here for more info
How Strong is Your Drink of Choice?

Below are typical ranges of alcohol percentages by volume (ABV) of some common types of drinks. See the proceeding section for more on how the strength of different alcoholic beverages can be measured:

In Missouri, you can get a DWI if you drive with a blood alcohol concentration (BAC) of 0.08% or higher, regardless of whether your driving ability was actually impaired. The law in Missouri also says that if you are driving a vehicle, you have given consent to submit to a chemical test for the purpose of determining the amount of alcohol in your blood. If you refuse to take a test there consequences that will follow that could result in the suspension of your license for one year ( 577.041 RSMo.).

In Missouri, the maximum blood alcohol content (BAC) for drivers who are under 21 (considered minors under some drinking and driving laws) is  0.02%. Penalties include suspension of license 90 days (first offense); 1 year (any subsequent offense).

For more information on laws, penalties and fines in reference to Driving While Intoxicated

Excessive drinking can be hazardous to everyone's health! It can be particularly stressful if you are the sober one taking care of your drunk roommate, who is vomiting while you are trying to study for an exam.

Some people laugh at the behavior of others who are drunk. Some think it's even funnier when they pass out. But there is nothing funny about the aspiration of vomit leading to asphyxiation or the poisoning of the respiratory center in the brain, both of which can result in death.

Do you know about the dangers of alcohol poisoning? When should you seek professional help for a friend? Sadly enough, too many college students say they wish they would have sought medical treatment for a friend. Many end up feeling responsible for alcohol-related tragedies that could have easily been prevented.

Common myths about sobering up include drinking black coffee, taking a cold bath or shower, sleeping it off, or walking it off. But these are just myths, and they don't work.

The only thing that reverses the effects of alcohol is time-something you may not have if you are suffering from alcohol poisoning. And many different factors affect the level of intoxication of an individual, so it's difficult to gauge exactly how much is too much (BAC calculators).

What Happens to Your Body When You Get Alcohol Poisoning?

Alcohol depresses nerves that control involuntary actions such as breathing and the gag reflex (which prevents choking). A fatal dose of alcohol will eventually stop these functions. It is common for someone who drank excessive alcohol to vomit since alcohol is an irritant to the stomach. There is then the danger of choking on vomit, which could cause death by asphyxiation in a person who is not conscious because of intoxication.

You should also know that a person's blood alcohol concentration (BAC) can continue to rise even while he or she is passed out. Even after a person stops drinking, alcohol in the stomach and intestine continues to enter the bloodstream and circulate throughout the body. It is dangerous to assume the person will be fine by sleeping it off.

What Should I Do If I Suspect Someone Has Alcohol Poisoning?

• Know the danger signals.
• Do not wait for all symptoms to be present.
• Be aware that a person who has passed out may die.
• If there is any suspicion of an alcohol overdose, call 911 for help. Don't try to
guess the level of drunkenness.

What Can Happen to Someone With Alcohol Poisoning That Goes Untreated?

Even if the victim lives, an alcohol overdose can lead to irreversible brain damage.
Rapid binge drinking (which often happens on a bet or a dare) is especially dangerous because the victim can ingest a fatal dose before becoming unconscious.

Don't be afraid to seek medical help for a friend who has had too much to drink. Don't worry that your friend may become angry or embarrassed-remember, you cared enough to help. Always be safe, not sorry. 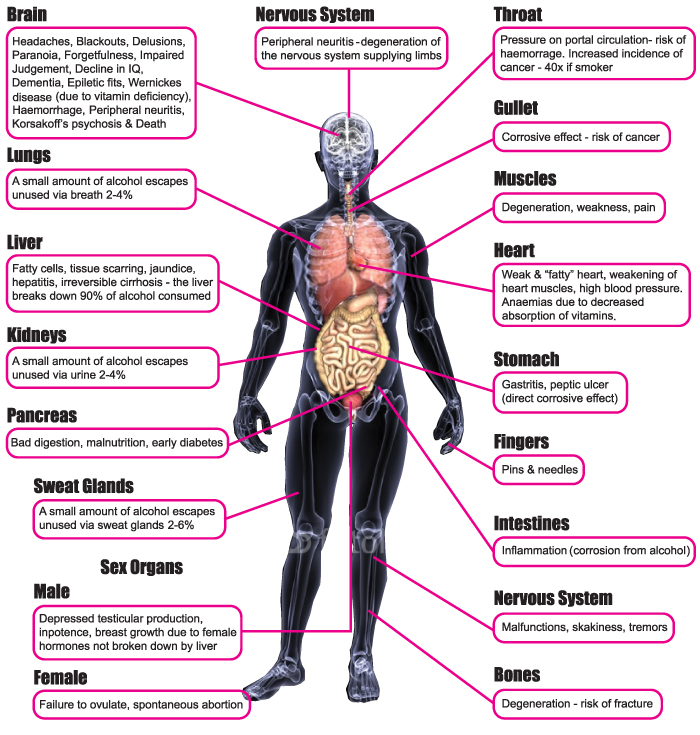